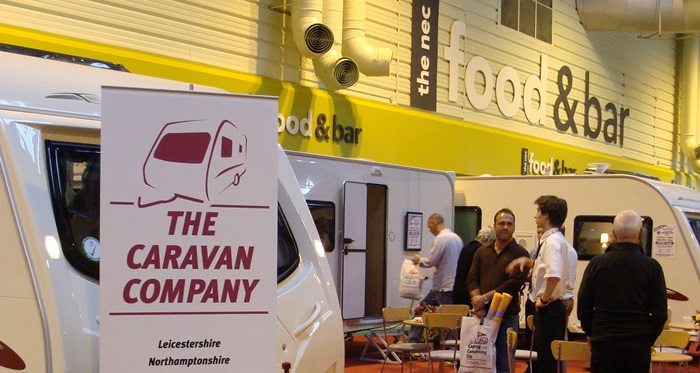 The Caravan Company is a longstanding client of Bray & Bray and has branches based in Northampton, Reading and Dorset and since its inception in 1993, is still continuing to grow at an impressive rate.  With a turnover of £13million annually, it is the largest retailer of second hand caravans in the country.  Moreover, within the next 12 months, there are plans to build a further 8,000 square foot building at the company’s premises in Northampton as well as to expand back into Leicester by purchasing new premises there.

Here, The Caravan Company’s owner Andrew Scott, speaks about how important it is to have a trusted legal advisor when running and growing a business:

Q: How did you choose Bray & Bray solicitors to become your legal partners?

A: My family has been involved in businesses in Leicester for generations and my father had a business in Leicester since just after the Second World War up until very recently, when he passed away.

Throughout his working life, my father had used one set of local solicitors and when I joined the family business in 1978 and needed to use a solicitor for things like buying a house, I asked whether I could use the same ones.  My father told me no, it wasn’t a good idea and that I needed my own trusted legal advisor who was of a similar age to me.

My father’s solicitor back then was Ken Bowder, who at one point was also the Lord Mayor of Leicester.  Although from a different law firm, Ken suggested that I contact a solicitor who he described as young, up and coming and as having potential.  The young ‘whipper-snapper’ Ken was talking about was Tim Gladdle and so I ended up with Bray & Bray.

Q: What types of legal services have you used Bray & Bray for?

A: As Tim grew up through the ranks, I understood that I needed people with different areas of expertise for different legal matters.  Over the years, I’ve continued to call Tim to explain what I needed at different times and he then always refers me to the best person to deal with my situation.

Whether it was buying and selling businesses, employee affairs, commercial property, corporate debt collection, buying houses or dealing with tenants of my commercial properties or rental properties – I have used Bray & Bray for all of them.  In fact, I think there’s still a rolled up sleeping bag kept there for me from the times I’ve slept over!

Q: Can you give an example of when you have received excellent service from Bray & Bray?

A:There are several of those!

“Probably most interesting was when I had bought the entire stock of a caravan manufacturer from a receiver, during the first week of October in 2008.  In order to sell all of these, I had arranged to exhibit at The National Caravan Exhibition at the NEC, which was due to take place soon after then, during the third week of October.

“My stand was already booked, but when certain other dealers and manufacturers found out about my plans they weren’t happy as I would be able to sell my caravans very cheaply because I had bought them at a very good price.

“I was due to start setting up at the NEC on the Friday morning and everything was prepared.  I had about 8 different models to show, which were ready in a yard in Coventry; the stand was coming down from Leeds and other things were due to arrive from the south coast.

“On the Thursday evening, the night before the exhibition, I was getting ready for bed and checked my phone which was on the bedside table.  I saw that I had a missed call and listened to a message from the exhibition organisers saying that they wouldn’t let me in to the exhibition.  This was despite the fact that I had signed a contract and paid for my stand in full.  Obviously, this had potential to be disastrous for my business – I had a multi-million pound deal relying on the exhibition to sell my caravans.

“That night, I hardly got any sleep and early in the morning I spoke to my wife, who said you need to go and see Tim.  So, early on the Thursday morning I arrived at Bray & Bray’s head office in Leicester before Tim had even got there.  As soon as he arrived, Tim took me into a board room and sat me down so that I could explain everything to him in full.

“That day, I didn’t actually leave the board room until 6pm.  In that time, the head of the Litigation Department looked at the case and involved other members of his team, then engaged a barrister down in London.  My case was heard at The Royal Courts on The Strand by the middle of the same afternoon and by 6pm, I had a High Court injunction against the organisers requiring them to allow me to exhibit immediately, which of course I did.

“I was able to go to the exhibition and in 6 days I sold 136 caravans, including every caravan I had bought just 2 weeks ago, during the first week of October.  All of these were serviced, PDI-checked, fully paid for and delivered to customers by 30th November.  It all took less than 8 weeks from start to finish, but it wouldn’t have been possible without the exhibition and the help from Bray & Bray.

Q: Having experienced using one solicitors’ firm for all of your legal affairs, how important would you say it is to have a trusted legal advisor that you can rely on?

A: You can’t run a business in any city without a trusted legal advisor.

For more information about The Caravan Company, visit the website: http://www.thecaravancompany.com/

← Client Interview: Probate for Mother’s Estate Client Interview: Divorce Court Case →
We use cookies on our website to give you the most relevant experience by remembering your preferences and repeat visits. By clicking “Accept”, you consent to the use of ALL the cookies.
Do not sell my personal information.
Settings Read MoreAccept
Privacy Policy

This website uses cookies to improve your experience while you navigate through the website. Out of these, the cookies that are categorized as necessary are stored on your browser as they are essential for the working of basic functionalities of the website. We also use third-party cookies that help us analyze and understand how you use this website. These cookies will be stored in your browser only with your consent. You also have the option to opt-out of these cookies. But opting out of some of these cookies may affect your browsing experience.
Necessary Always Enabled

Any cookies that may not be particularly necessary for the website to function and is used specifically to collect user personal data via analytics, ads, other embedded contents are termed as non-necessary cookies. It is mandatory to procure user consent prior to running these cookies on your website.